Western Sahara, a land rich in natural resources including phosphates and plentiful fishing, lies south of Morocco, north of Mauritania and west of Algeria. Its long coastline stretches along the Atlantic Ocean and its indigenous population is known as the Sahrawi. It is currently one of the world’s 17 territories listed by the United Nations as “non-self-governing,”

Often referred to as Africa’s last colony, Western Sahara was under Spanish colonial rule until 1975, when Spain withdrew from the territory and allowed Morocco and Mauritania to invade. Morocco accompanied the military invasion with a large-scale re-population campaign known as the Green March, with hundreds of thousands of Moroccan civilians settling in the territory with the promise of financial incentives. Just days after the invasion, U.S. Secretary of State Henry Kissinger privately pushed for a “rigged vote” at the United Nations Security Council to prevent criticism of Morocco, a longtime US ally, and the Ford administration worked behind the scenes to support Morocco’s claim over the territory.

Often referred to as Africa’s last colony, Western Sahara was under Spanish colonial rule until 1975, when Spain withdrew from the territory and allowed Morocco and Mauritania to invade.

The Moroccan government began decades of torture, disappearances, killings and repression against pro-independence Sahrawis living in the occupied territory. Thousands of Sahrawis fled the invasion and took to the desert, leaving family members and homes behind. Morocco bombed the fleeing Sahrawis with napalm and white phosphorous using French-built warplanes. The killings and torture have formed the basis of a genocide case filed by Sahrawi victims before the Spanish National Court. 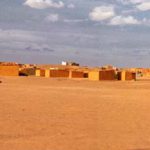 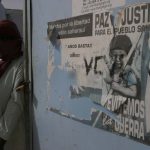 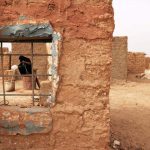 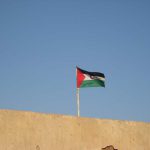 Sahrawis who fled into exile settled deep in the Sahara Desert of Southwestern Algeria, in an area near the city of Tindouf ceded to them by the Algerian government. While the women built and ran the refugee camps, most men joined the Polisario Front, the Sahrawi liberation movement, and went to war with Morocco. Morocco’s army, with U.S. military support, drove the Polisario to Western Sahara’s eastern desert and built the world’s second-longest wall with the help of US weapons companies Northrup and Westinghouse. This fortified 2.700km-long berm, patrolled by 150 thousand Moroccan soldiers and lined with an estimated 7 million landmines, divides Sahrawis living under Moroccan occupation from those exiled in the refugee camps.

The wall, as known as “the berm”, is fortified 2.700km-long, patrolled by 150 thousand Moroccan soldiers and lined with an estimated 7 million landmines, divides Sahrawis living under Moroccan occupation from those exiled in the refugee camps.

Mauritania withdrew from Western Sahara in 1979. The war between the Polisario and Morocco ended in 1991 with a UN-brokered cease-fire accord and a promise of a “free and fair” referendum on self-determination for Sahrawis. Since then, Morocco has blocked attempts to organize the vote, and the UN Security Council has refused to implement its own referendum plan or allow its peacekeeping mission, known as MINURSO, to monitor the human rights situation in the territory —a key demand of Sahrawis and of international human rights organizations. The UN Security Council convenes each year to renew MINURSO’s mandate, a time when Sahrawis usually take to the streets to demand the adoption of human rights monitoring and the celebration of the referendum.

One half of Sahrawis still live in the occupied Western Sahara, where they suffer from severe repression and where practically all Sahrawi human rights organizations are banned and international media and human rights monitors are rarely allowed in. In 2010, tens of thousands of Sahrawis set up a protest camp called Gdeim Izik outside the city of Laayoune to protest the occupation, an action pre-dating the revolutions in the rest of the region. It was violently dismantled by the Moroccan police and Morocco subsequently tried 24 Sahrawi activists of instigating the violence, trying and sentencing them to decades in prison following confessions obtained under torture.

The Gdeim Izik political prisoners have been dispersed in prisons throughout Morocco, far from their families. They engage in periodic hunger strikes to protest their conditions, and Sahrawis, led by their families and prisoners’ associations, often protest on the streets with signs calling for their freedom.

In the refugee camps, living conditions are harsh: Sahrawis endure extreme temperatures, live on arid terrain and lack basic infrastructure and services such as clean drinking water and sanitation. The population, of which almost half are children, has few employment opportunities and depends on international humanitarian aid for survival. Most refugees have never seen their homeland.

Today, no country recognizes Moroccan sovereignty over Western Sahara—one of the most inaccessible places in the world. The UN and the International Court of Justice, as well as international legal experts, also agree that Western Sahara remains a non self-governing territory, pending de-colonization.

However, Morocco continues to exploit the territory’s natural resources without the consent of the Sahrawi people. Through Morocco-European Union trade accords, Rabat exports seafood, phosphates and agricultural products, despite international court rulings that specifically prohibit the commercialization of products from Western Sahara without specific consent from their rightful owners – the Sahrawi people.