The importance of training

The importance of training

Training has always been an essential component of FiSahara. Since its inception, one of the festival’s objectives has been to equip the Sahrawi people with the means and knowledge to tell their own stories. So by its second edition FiSahara had launched the first audiovisual training workshops that would henceforth become a permanent part of the festival. 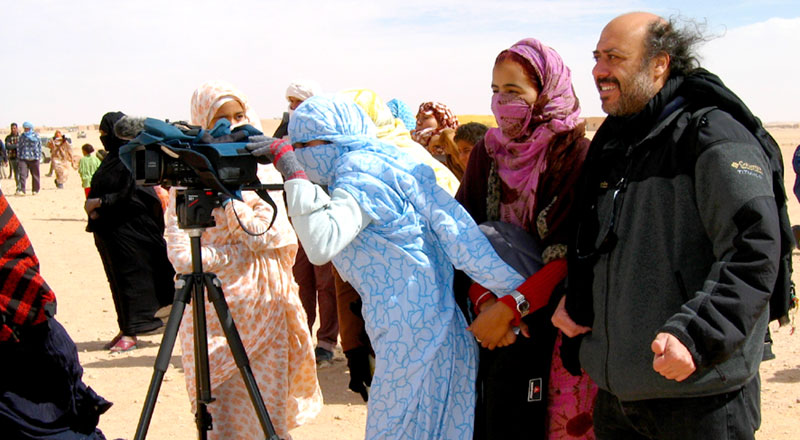 Jordi Abusada during the first workshop in FiSahara in 2005.

Peruvian-Palestinian cinematographer Jordi Abusada pioneered the 2005 film workshops. As director of photography and filmmaker, he worked on numerous documentaries focusing on social justice and human rights such as Chiapas: hablan los rebeldes (Chiapas: The Rebels Speak) and La Espalda del Mundo (The Back of the World). Abusada taught FiSahara’s first Camera workshop, which was offered with others such as Editing (Martín Eller) and Sound (José Nieto). (Note: Jordi died in 2017 and he is deeply mourned by his FiSahara family).

These workshops have been open to a wide range of participants, although children and women took on a central role. Some of the most memorable trainings for kids were offered by Spanish collectives such as La Claqueta (see video above) and Gran Angular from Canary Islands, which teaches filmmaking in local schools in the camps and has produced a series of animated shorts in collaboration with their young students. 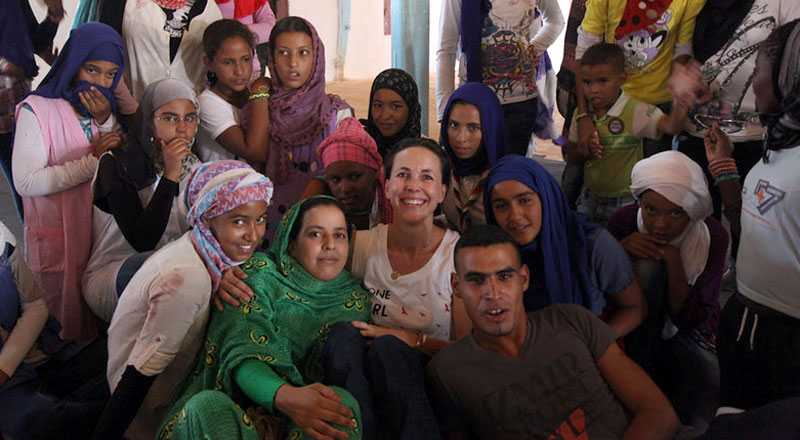 The workshops mirror Sahrawi society, whose feminist identity and philosophy empowers and amplifies the voices of Sahrawi women and girls. Women comprise a significant portion of the student body and many of the workshops are taught specifically for them. In its 2013 edition and coinciding with the International Day of the Girl, Creative Campaign Director and Producer Martha Adams of the film Girl Rising participated in a workshop and group discussion with Sahrawi women and girls following the screening of the film, which is tied to a global campaign to promote girls’ education. 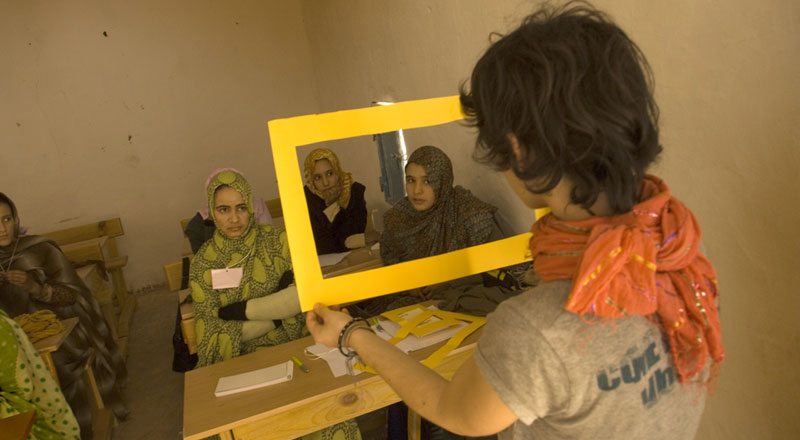 In 2015, FiSahara also launched  a series of gender-focused workshops known as “Filmmakers of the Desert” pioneered by gender specialist Jara Velasco and film instructor Javier Aguirre, which train Sahrawi women with no previous audiovisual experience to make short films using their cellphones. Participants produced stories that they were able to share with family members living in the camps and in the Morocco-occupied territory. In 2016, the workshop was led by director, photographer and Gazan activist Riham Ghazali, whose short films (including Madleen and N.G Kooz) were screened at the festival, and Sahrawi filmmaker Hayetna Mohamed Deidi.

FiSahara’s focus on human rights film trainings gained strength in 2013 when activists from around the world visited the Sahrawi refugee camps during FiSahara’s 10th edition and shared their films and experiences and stories with their Sahrawi counterparts. FiSahara launched its Human Rights Video Advocacy workshop series for self-taught media activists from the Morocco-occupied Western Sahara, who traveled to the camps from the territory.  Maureen Sibanda (attorney/video advocacy trainer with Zimbabwe Lawyers for Human Rights and WITNESS), Nadir Bouhmouch (Moroccan filmmaker, activist and cofounder of the Guerrilla Cinema Collective), Salma Shamel (Mosireen Collective in Tahir Square — Egypt) and Iara Lee (Cultures of Resistance) each taught a module, which trained the activists in how to film and share videos documenting human rights abuses in a safe, effective and ethical manner.

These workshops continue until the present, focusing on developing the audiovisual tools necessary to document, inform, narrate and report human rights violations.

FiSahara has continued to reinvent and reimagine trainings to better reach Sahrawi youth in the refugee camps. In 2015, Music for Resistance brought together Sahrawi, Spanish and US hip hop artists with children and teens from the camps to explore rap as a creative, non-violent form of resistance. 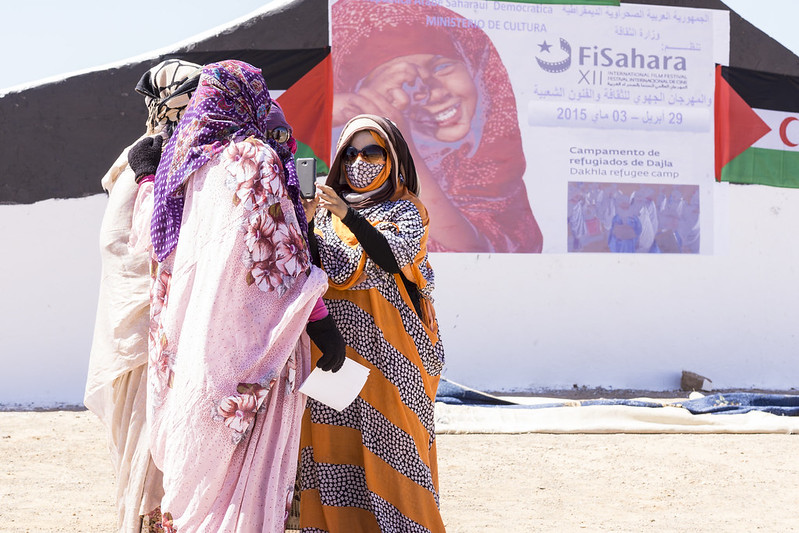 The festival has progressively become a forum for cross-cultural activism that encompasses numerous creative forms. In 2013-14, the Zaytoun Collective (Palestine) taught a highly participative children’s workshop on how to create a videogame. The kids first drew their own lives and stories; then from these drawings and through collective discussions they created and illustrated two Sahrawi characters and developed their life stories about occupation and exile. The characters were incorporated into Zaytoun: The Little Refugee, an interactive videogame about displacement and conflict that situates the user in the shoes of those who are fleeing conflict and has been made by refugees from Palestine, Syria and Western Sahara. 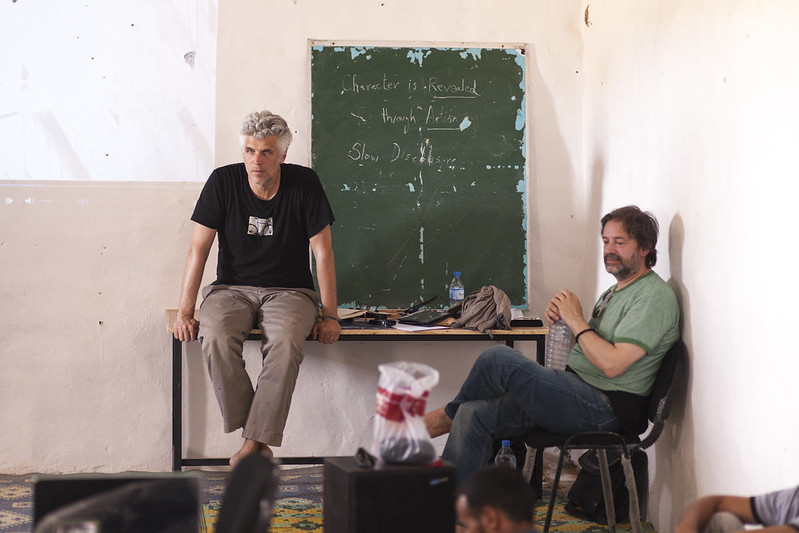 As FiSahara’s workshops expanded their cultural realm, they also continued to focus on film. In 2014 US filmmaker and screenwriter David Riker and Mitko Panov, Macedonian filmmaker and film professor, taught a Master Class on visual storytelling and Directing Non-professional Actors for students from the Abidin Kaid Saleh Film School and Sahrawi media activists from the occupied Western Sahara. Panov and Riker, who wrote the screenplay for the Oscar-nominated documentary Dirty Wars (which won second prize at FiSahara), were impressed by the richness of the stories that their Sahrawi students wanted to tell through film. We will re-visit this story in our next chapter!