Film is a powerful means to convey a story, educate or mobilize around an issue. For Sahrawi refugees, the ability to make films about their lives and the challenges they face is an empowering experience, a chance to tell their stories in their own words.

The Abidin Kaid Saleh Audiovisual School opened for classes in 2011 with a main mission: to train young Sahrawi refugees in film and video production so that they can portray their lives, address critical issues and empower their communities. These young people have become the first generation of Sahrawi filmmakers.

The school was built in 2010 with the support of Spanish filmmakers who identified the need among young Sahrawi refugees for year-round media training. It is located in the Bojador camp and provides full board so that students from all the camps can attend throughout the year.

In the first two years, Sahrawi women made up about 85% of the school’s student body. This makeup reflects women’s key role in Sahrawi society: women and girls built the refugee camps and continue to play a critical role in Sahrawi life, occupying leadership positions in Sahrawi politics, health, education and culture.

What the school does

Young Sahrawis have few employment opportunities in the refugee camps. Many study high school and university abroad and return to a life of unemployment and underemployment.

Film has given purpose to my life. Through filmmaking I can send a message to the world that we exist. Mohamed Ahmed Habeim, film school student

The audiovisual school offers these young people media training and skills that enable them to create powerful communication tools to improve their lives and their communities and to create international awareness about their situation. The skills learned help them to find employment in the camps’ TV and radio stations. The students can also participate in film projects in the camps and are beginning to make their own movies, giving birth to cinematography that is uniquely Sahrawi.

Many students use first-hand experiences and autobiographical portraits to address issues such as: 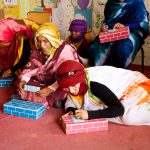 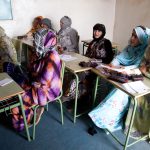 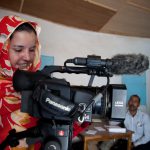 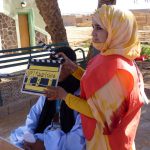 The Sahrawi people are thirsty to tell their stories and film is like water to them. David Riker, director The Girl, screenwriter Dirty Wars (USA).

It introduces students to a wide variety of media and filmmaking tools and provides hands-on training in each of the specialties. The students make several short films throughout the year.