Ken Loach and his Iron-clad Commitment to Western Sahara

Ken Loach and his Iron-clad Commitment to Western Sahara

When launching an event as complex as FiSahara, both in terms of its logistics as well as the media silence affecting the conflict in Western Sahara, having the support of renowned figures from the cinematic world can make all the difference. Since the festival’s first edition in 2003, one such celebrity who has given his full support is British director Ken Loach. 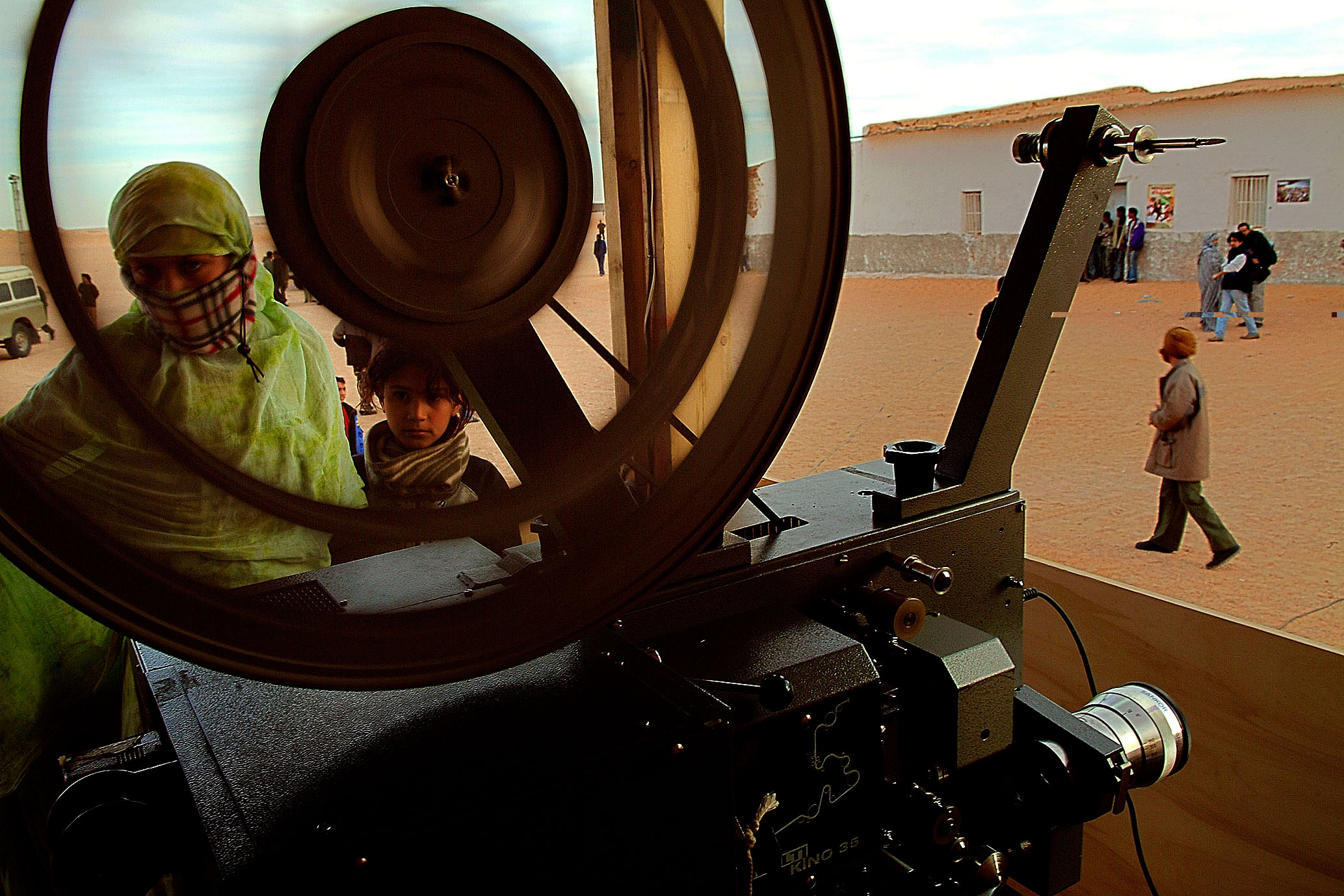 From the festival’s launch until today, fifteen editions in total, Loach’s films have made it to the official section five times, making him the director to show the most feature films at FiSahara. The director has declared to the press: “I would encourage everyone to attend this film festival once in their lives.” 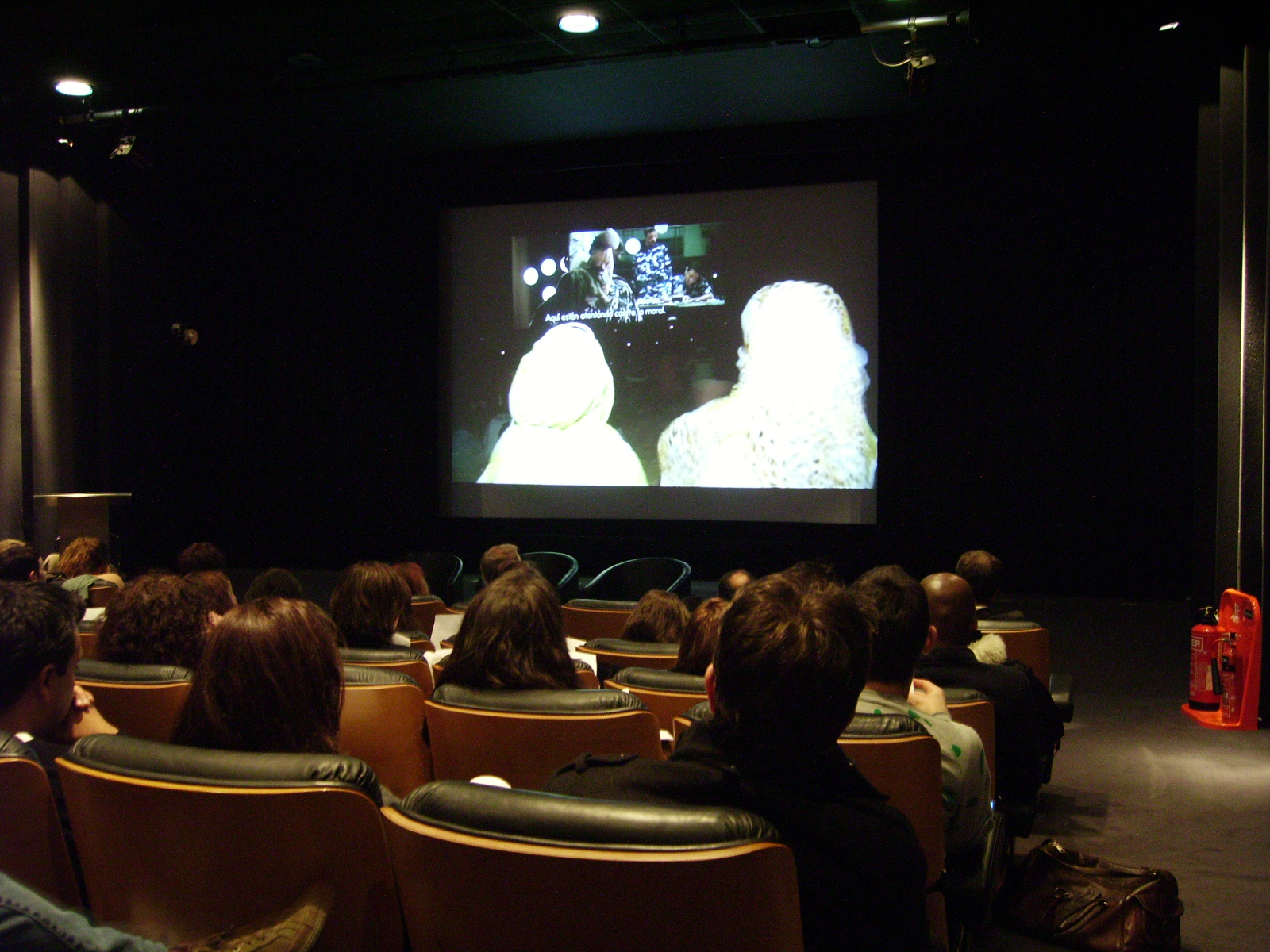 It was that third year, in 2008, when Loach won the ‘Desert Rose’, the festival’s top award, for It’s a Free World. The film portrays the exploitation of immigrant workers from the point of view of the exploiter and was extremely well received by Saharawi audiences, who gave it the highest honor. Laverty was awarded Best Screenplay at the Venice Film Festival for his work on that film, which was also nominated for the Golden Lion best film award. The actress Kierston Wareing was nominated twice over for the BAFTA TV Awards and the British Independent Film Awards (BIFA), as Best Actress and Most Promising Newcomer. 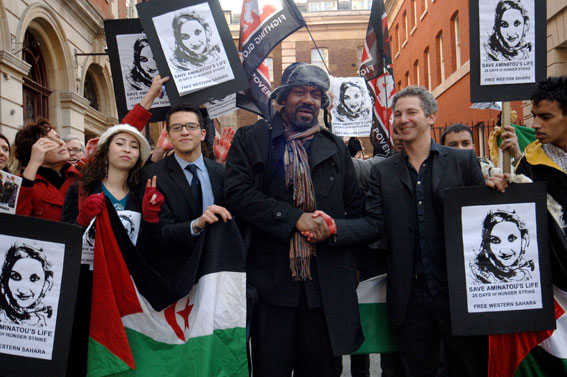 Aminetu Haidar supporters in London in 2009.

And, in 2010, Loach brought Looking for Eric (United Kingdom, France, Italy, Belgium, Spain 2009) to FiSahara’s Desert Screen. A story about an unusual friendship between  the legendary French football player Eric Cantona and a postman and fan of Cantona’s also named Eric, the film was a huge hit with the younger Sahrawi audiences, known for their passion for football.

Loach’s support for FiSahara went further: in 2009, the director sponsored the festival’s official presentation in London, which took place at the Twentieth Century Fox studio headquarters in the heart of Soho (header photo). The presentation coincided with a hunger strike staged by Sahrawi activist Aminetu Haidar at an airport in the Canary Islands. Known as the ‘Sahrawi Gandhi’, Haidar was detained and deported to Spain from the city of El Aaiún in Moroccan-occupied Western Sahara for writing in her homeland as Western Sahara and not Morocco, as the Moroccan immigration authorities demanded, on an immigration entry form. 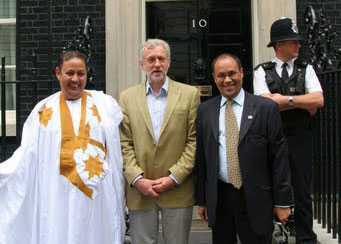 Loach expressed surprise and indignation, asserting in an article co-written with Laverty in The Guardian that “Mohammed VI’s officials demand, as a condition of return of her passport, that Aminatou Haidar apologise to the king for the temerity of describing her homeland as Western Sahara instead of Morocco on a form. This, from a woman who was tortured and disappeared for four years in a secret detention camp. She was blindfolded, gagged, beaten, inflicted with electric shocks, and threatened with rape. If Mohammed VI had an ounce of humanity, he would beg for her forgiveness.” In 2019 Haidar was awarded the Right Livelihood Award, known as an Alternative Nobel Prize. 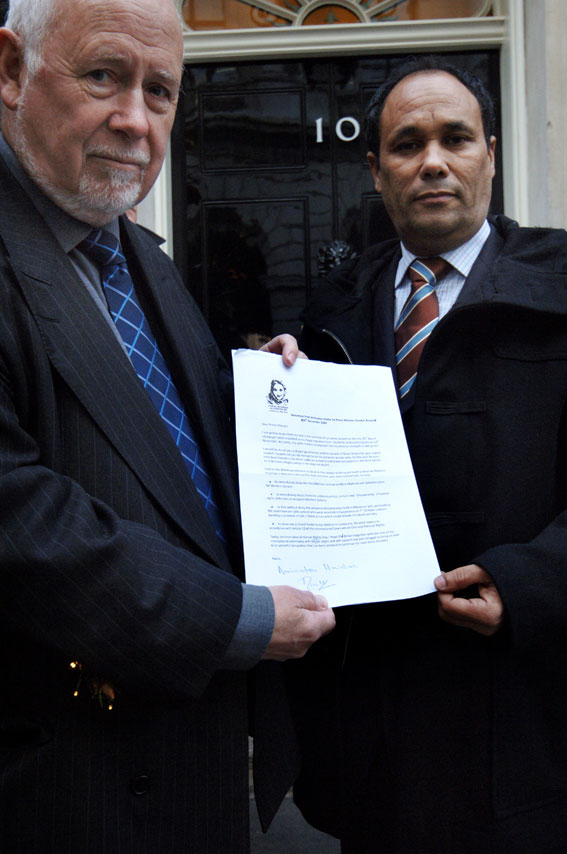 Kelvin Hopkins MP and Lamine Baali, chief representative of the Polisario Front in the UK, at the 10th Downing Street. (Mina Yamini)

Both Loach and Laverty poured out support for Haidar, declaring in a statement that “we live in hope and send our solidarity to this remarkable woman who, despite being ‘disappeared’ for 4 years and tortured by the Moroccan authorities still has the courage to resist. But what a tragedy it would be for non violent resistance, and to the possibility of a peaceful solution, if she is left to die”. After a 32-day hunger strike, Haidar won the battle with Morocco and managed to return to Western Sahara on a medicalised plane, weakened but victorious.

Loach, whose films portray ordinary people struggling to survive the harshness of structural social inequality and to fight injustice in their everyday lives, is firmly committed  to the Saharawi cause for freedom and self determination. Undoubtedly, his contribution has helped to shine a spotlight on FiSahara and, with it, on the human rights violations suffered by the Saharawi people. In 2012 he also joined a petition to demand the decolonization of Western Sahara, along with political representatives such as Jeremy Corbyn, MP Chair of all-party parliamentary group on Western Sahara and petitioner on Western Sahara at the UN (2009); Cathy Jamieson, MP; Andy Love MP; Paul Flynn MP at the UN Fourth Committee, (2011), and renowned film personalities such as Terry Jones and Javier Bardem, who was a petitioner at the UN Fourth Committee for decolonisation (2011).

There is only one other filmmaker who ties with Loach in the number of films screened on the Sahara’s sand dunes: Spanish director Icíar Bollaín. The award-winning Spanish filmmaker, who is Laverty’s longtime partner, maintains a strong friendship with Loach.