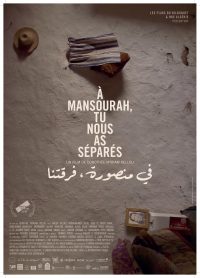 In an edition like FiSahara 2022, which promotes the theme #Decolonize!, could not miss a film focus on the decolonization of a sister nation of the Sahrawi, such as the Algerian. That is why In Mansourah you separated us, by the director and journalist Dorothée Myriam Kellou, arrives at this XVII edition of the festival. Breaking the silence, for the first time since the Algerian War of Independence (1954-1962) took place, the testimonies of a black -and forgotten- episode of History are offered: the rural resettlement camps that were created then.

In this film, the French-Algerian director narrates how she accompanied her father Malek to his hometown, Mansourah (Algeria), which she had not set foot in since childhood. The image shows Malek walking through the rubble that was once her home, indicating the location of the kitchen, the bedrooms… “This is where I was born and raised,” she says. “I lived here from the day I was born until we were deported.” She even remembers the moment when he was almost killed by a flare fired by the French army.

In Mansourah you separated us is told how during the War of Independence, France turned towns like Mansourah into resettlement camps for more than 2.3 million Algerians displaced by the French army. The history of these deportations remains largely unknown, both in France and among the younger generations of Algerians.

Dorothée Myriam Kellou, TRACE award winner for investigative journalism for uncovering in 2016 how the French company Lafarge indirectly financed ISIS during the war in Syria, sheds light on this episode through the testimonies of her father and other victims, who narrate how they were separated from their families, show their scars from gunshot wounds or recount how those who resisted and fled to the hills were bombed with napalm by France.

This film has become essential to discover Algerian-French history and, this year, FiSahara brings it to the Big Screen in the Desert.